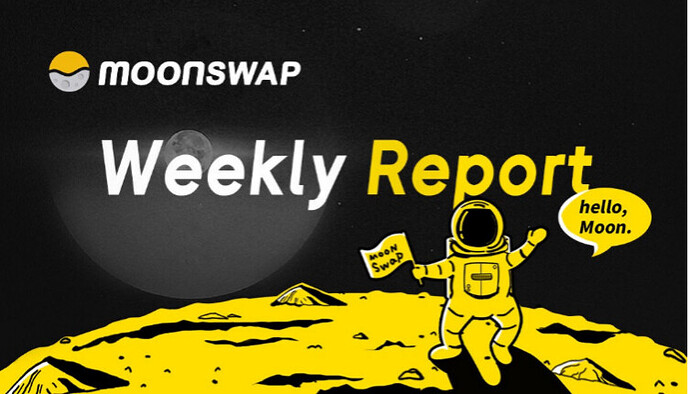 Hello MoonSwap community. Thanks to our collaborative work, the MoonSwap ecosystem has made some milestones during this week. Development wise, MoonSwap launched its V2.0 Website for a greater user experience. AMP-ETH was listed on MoonSwap and cAMP-cETH mining pool is open. In the meantime, ConDragon Minting System was launched in order to make ConDragon NFT once again have a large-scale deflation. Ecosystem wise, Moneyswap joined Asia DeFi Alliance, a collaborative organization initiated by MoonSwap. Columbus-SDK is coming soon to attract various gaming applications flood into the MoonSwap ecosystem.

Community wise, ConDragon held two campaigns to celebrate the launch of the NFT minting function. AMP Trading Contest was also held to encourage users to trade cAMP-cETH. Meanwhile, Bug Bounty program was released so as to better detect bugs in our new website.

Amp is a collateral token used on the Flexa network. The token is staked by the community in the Flexa Capacity contract to wallet projects in order to secure digital payments at merchants. Flexa is ranked #18 on DeFi Pulse with $140M locked, and #1, with 90% dominance in Payments.

Up until now, there are a total of 20 members in the Aisa DeFi Alliance.

MoonGaming will release Columbus-SDK to support the cross-chain migration of games, and connect more games to the MoonSwap ecosystem.

Minting Launched, ConDragon Will Have Another Round of Deflation NFT

[铸造banner-en] The ConDragon NFT minting system will be officially launched at 10:00 on January 14, 2021(UTC). As a result, ConDragon NFT will once again have a large-scale deflation. Minting rules: The minted SSS-level ConDragon NFT is randomly generated; Genesis NFT can replace any Level-1 ConDragon NFT. And it is restricted to use only one at a time (Only the number is verified. It will not be burnt); 14 different ConDragon NFTs with the same level can be synthesized into a corresp…

From January 14th to 17th, a cAMP-cETH Trading Contest was held by MoonSwap and AMP to celebrate the launch of cAMP-cETH on MoonSwap and the first mining. 140000 cAMP tokens with a current value of more than $1100 were shared through 3 activities:Provide Liquidity to share 80K cAMP, Lucky hash to share 30K cAMP, and Trade to share 30K cAMP.

[AMP_twitter(EN)] To celebrate the launch of cAMP-cETH on MoonSwap and the first mining, we will jointly hold a trading contest with the AMP team, come to share 140,000 cAMP tokens with a current value of more than $1100!

Provide Liquidity to share 80K cAMP During the event, users should provide at least $1000 liquidity in MoonSwap to the new liquidity pool (cAMP-cETH). After the event ends, yo…

MoonSwap BUG Bounty program was released on January 15th. Users can submit the bugs they found about the new website V2.0 to https://forms.gle/oCbhdoSDj2hUth5T8. Or you can leave your report on the forum. All bug discoverers will be rewarded with 10 to 50 cMOON each after confirmation and assessment by the MoonSwap team.

[2.0] MoonSwap V2.0 is officially launched. It will cover the entire MoonSwap ecosystem including SWAP, FARM, MoonCake, Governance, NFT, Liquidity, Kepler and Gaming. Link: https://moonswap.fi/ (only PC now) The old site: https://v1.moonswap.fi/ More dimensions are added to the info display session on MoonSwap V2.0, which includes the value of your MLP token, the transaction fee amount you gained, and more details. Meanwhile, we will release the MoonSwap BUG Bounty program, please submit …