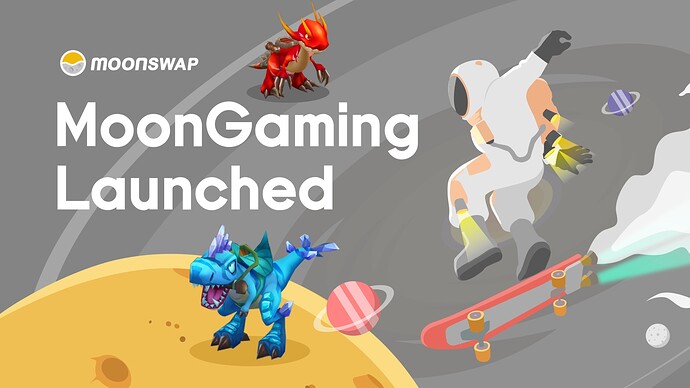 When the concept of “DApp” emerged in 2017, “games” were considered one of the best scenarios for blockchain applications. With the increasing popularity of DeFi, “DeFi+NFT” has gradually become a trend. In order to allow traditional game developers to introduce games to the blockchain world at a lower cost, MoonGaming and Columbus-SDK came into being.

Cross-chain migration, game props NFT issuance, transaction and auction with only one click

The world’s first DeFi+NFT game+mining model has been verified by ConDragon’s hot games and attracted more than 1 million cMOON assets within one month.

Game and the $MOON ecosystem mutually empower each other with comprehensive access to the MoonSwap community ecosystem.

Community support is provided by the MoonSwap ecosystem. Games and the $MOON ecosystem will mutually empower each other and jointly contribute to ecological prosperity.

ConDragon is the first game entering into the Columbus-SDK ecosystem and is officially launched. As an important part of MoonSwap ecosystem, MoonGaming will also introduce more excellent games through Columbus-SDK.

By the way: It’s currently recommended to use PC + Chrome