拍卖banner-en1800×720 406 KB
Join ConDragon Genesis Auction and Get Dinosaur NFT Airdrop
We would like to express our gratitude to the ConGragon, MoonSwap, and Conflux communities. With our collective contribution, within 20 days into the NFT blind box persale,

Now, we are glad to announce that the long-expected SSS-level NFT auction will be released at 10am, Jan. 7, 2021, UTC.

Participants shall bid with cMOON;

The auctioned ConDragon NFT will be won by the highest bidder;

The countdown for each auction is 24 hours;

When there is less than 1 hour left, 10-minute-cooling time will be added to the countdown when there is a new bid and the limit is until 1 hour.

According to the smart contract, every new bid needs to be 10% more than the previous one. The system will then distribute 20% of the 10% increase to the previous bidder and 80% to the auction reserve pool.

The highest bid will go to the auction reserve pool in 100%.

50% of the funds in the auction pool will be injected into the ConDragon NFT staking pool and the remaining 50% will become ConDragon’s revenue. 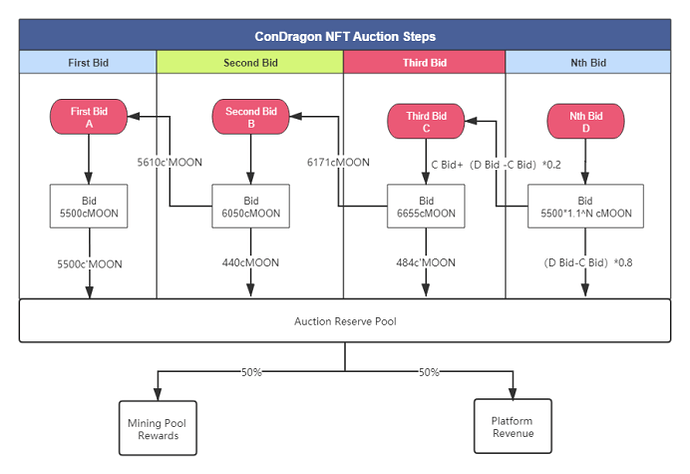